Due to his heart throb status; it was inevitable that sooner or later Sacha would be asked to appear on films and television. A career lasting fifty years, several films and dozens of television shows marked the course of the man who would become in the sixties the very incarnation of relaxation and an icon of French elegance.

It was television that would show itself to be the perfect medium for Sacha’s multi talented personality.

Sacha Distel was above all a man of the music hall, a musician, almost a child of the theatre. The cinema was for him an art acquired far from the spontaneity he valued above all. Television would give him the chance to combine the two sides of his personality: musician and entertainer.

Return to our story: the first meeting between Maritie, Gilbert Carpentier and Sacha took place in the RTL radio studios. At the time Sacha was a guitarist, Juliette Greco’s guitarist. Guitarist ? Without a doubt a bit more, seeing the looks that Juliette threw to the producer who, writing about this interview years later in her memoires: « (...) I can still see her guitarist. What a gorgeous face, eyes, what a smile. I don’t know either where he was born nor where he came from as Piaf sung (...) »

A few years later (beginning of the 60’s) 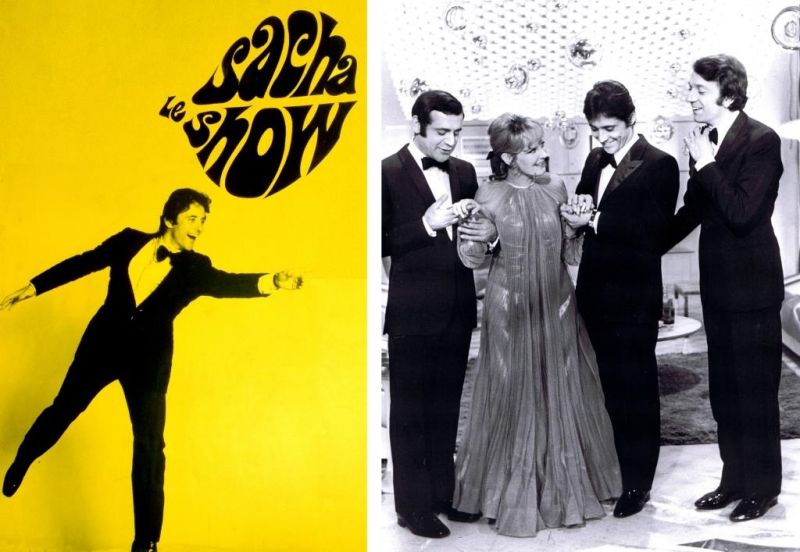 The ’Carpentiers’ had gone on from the radio to the television and Sacha from the status of brilliant guitarist to that of super star. In-between they had sometimes worked together on radio programmes to produce a show with promising potential. On return from a trip to the States, Maritie and Gilbert decided to produce for France an ‘American’ style variety show; which they saw as a show filmed with bow ties, dinner jackets, humour, new duos, sketches, dancers, the whole works. A good idea but who could be the French Dean Martin: an artist capable of singing, dancing, holding together a show, and, if possible, handsome and especially quick on the repartee? Sacha!

The first edition of what was to become a cult programme was to be called « Guitare et copains (Guitar and Friends) », a slightly ridiculous name but, was defended by its inventers, as a « working title ». A sort of rough copy. In reality, it was in fact the title of a song by Paul Anka that Sacha had just brought out in French.

This title would come a bit later, whispered by Maritie, because she found it « unpronounceable and so people would make an effort to memorise it ». She was right. The « Sacha Show », was an adventure that today no one would have ever attempted. At first, there was the team. Around Sacha, billed as star presenter: Jean Pierre Cassel, the chic charming dancer with a courteous sense of humour, the truculent Jean Yanne, finally, Petula Clark, stunning talented English singer with her irresistible accent. Then there were the duos. Modern television has never invented anything like it. Each episode of the Sacha Show would have its share of duos. Most of them never seen before, composed and written by a certain... Serge Gainsbourg!

In the wings, the Carpentier couple, the three decades of variety show, orchestrated by the celebrated director Georges Folgoas. The whole thing with orchestra and live! 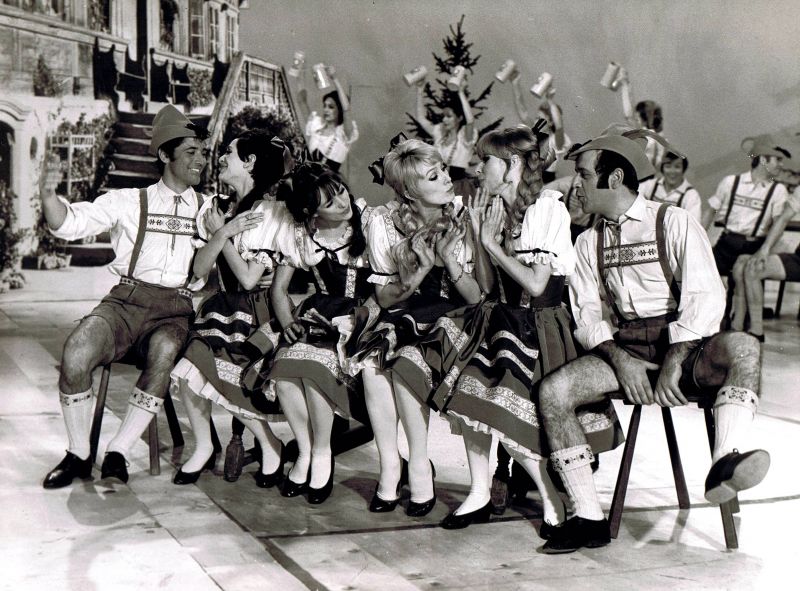 Ten years of popular television, of quality, and especially never priggish. Everyone appeared: from (friend) Johnny Halliday to Sardou including Mireille, Sylvie, Aldo, Mort Shuman and all the others... The « Sacha Show » went on for ten years (until the middle of the 70’s) one of the favourite French television shows. Stand up comedy ahead of its time, mock interviews, sketches, exceptional exclusive duos (fond memories of Dalida singing with Aldo Maccione or Sacha getting Isabelle Adjani to sing for the first time!) The « Sacha Show » quietly revolutionised television entertainment contributing to the fame of numerous artists.

In 1970 Sacha’s success across the channel pushed the BBC to ask the sexiest of French singers to present a show. In the States, Sacha would also have his own programmes where he showed his ability to play his natural elegance to the full.

Finally, in the 80’s, the French TV channel TF1 asked Sacha to present for a season « La belle vie », an entertainment show mainly inspired by the mythical « Sacha Show ». The television loop had come full circle.

Sacha and the cinema 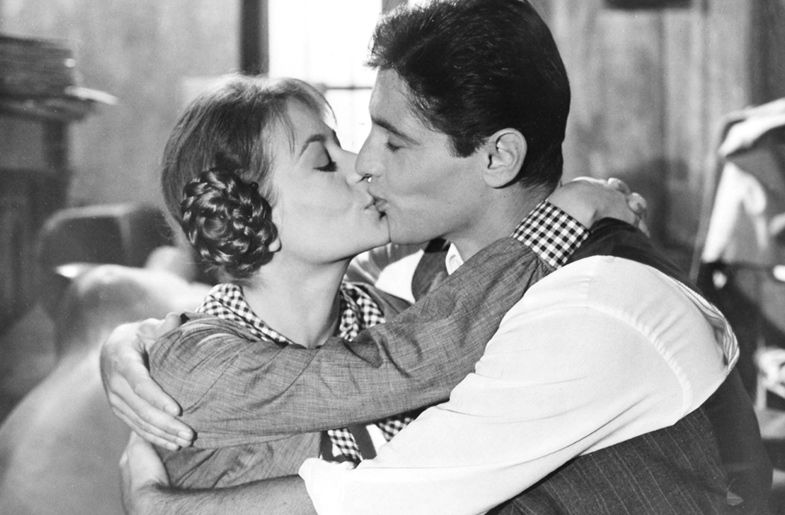 History relates that it was in 1952 and then still under the guidance of « Uncle Ray » that Sacha made his first appearance in front of a camera. He played a small part in the film by the up and coming director Jean Boyer. In « Femmes de Paris », in a screenplay part written by Ray Ventura with music by Paul Misraki, Sacha, just out of adolescence, played next to the great Michel Simon but also several young people of his generation also looking for fame: Robert Lamoureux, Roger Pierre and Jean-Marc Thibault. It was then most probably at the beginning of the 60’s that Sacha, having made his mark singing, became interested again in the cinema. And by the front door: in 1960, he played the leading role in « Les Mordus » by René Jolivet. A thriller where he played the part of Jean-Pierre Bernard, a prisoner on the run who gets back on track thanks to the devoted love of a post office worker played by Dannick Patisson. He also took the opportunity of writing the film music.

Sacha also made an appearance in the Louis Malle’s well-known film « Zazie dans le métro » beside Catherine Demongeot, Philippe Noiret and Annie Fratellini. Gradually, Sacha worked his way into the film world. The following year, while shooting a scene in Anatole Litvak’s classic « Aimez-vous Brahms » with Ingrid Bergman, Yves Montand and Anthony Perkins, he wrote « Marina » the music for Roger Vadim’s « L’orgueil » in the anthology film « Les sept pêchers capitaux ». Just for the record, « Marina », lyrics and interpretation by Tony Bennet, would become a short time after a famous standard entitled « The good Life ». In French « La belle vie »…. Does that mean anything to you?

If there hadn’t been the song, no doubt that Sacha, a jazz fan, would have followed French New Wave cinema just emerging. But in this beginning of the 60’s, having already acquired a reputation and image of a popular singer, Sacha concentrated on light hearted films and took part in a series of family films.

He shone guitar in hand in « Nous irons à Deauville », a humorous comedy by Francis Rigaud with Michel Serrault and Louis de Funès in the main roles. Here Sacha showed his talent beside Claude Brasseur, Pascale Roberts and Jean Carmet, In 1963 in the same style, he played Roger, lover of Marie-Paule, Annie Girardot, compulsive gambler in « La bonne soupe » by Robert Thomas. Next year, in 1964, he took part with Jean-Louis Trintignant, Francis Blanche, Darry Cowl, Marie-Josée Nat, Jean Poiret, Michel Serrault and tens of other guest stars in Michel Drach’s comedy « La bonne occase » which was a phenomenal success. The film would mark the end of the first part of the Sacha’s film career, as he was too taken up with singing to do both. 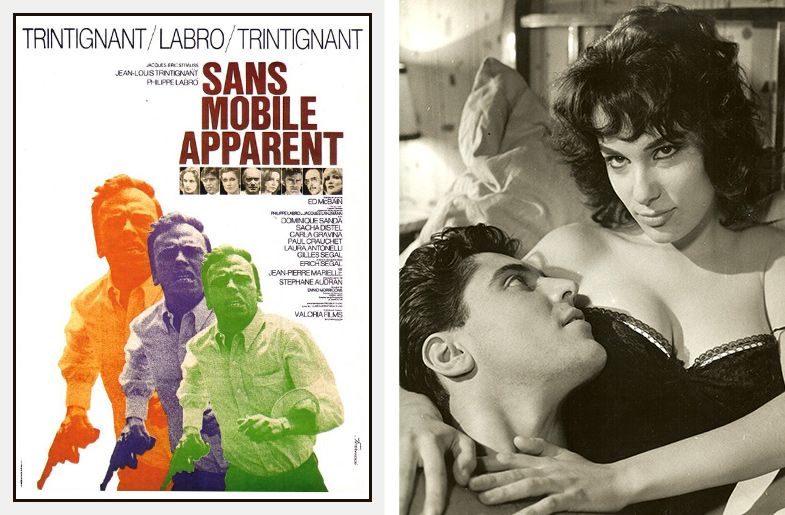 Claude Lelouch, who had left for a while documentary filmmaking to concentrate on crime films, convinced Sacha to return in front of a camera to play … himself! Typically Lelouch! Sacha Distel played Sacha Distel in « Le Voyou » with Jean-Louis Trintignant, Danièle Delorme, Charles Gérard and Yves Robert. But it was in 1971 that Sacha would play in his best film: « Sans mobile apparent » by Philippe Labro with Jean-Louis Trintignant, Dominique Sanda, Jean-Pierre Marielle and Stéphane Audran. He played the part of Julien Sabirnou, television star and target of a mystery killer. The American style staging, Labro’s dry and nerveuse style made the film a great classic of French thrillers of the 1970’s.

At this time, Sacha was again confronted with dilemma of having to choose: cinema or singing. Once again, he’d choose the stage: England was ready for him.