Trained at the tough school of the Champs Elysées dance hall band, the Collégiens or 16th arrondissement parties, Sacha always loved the stage. With or without his guitar, solo or in a group, large orchestra or in a musical, he never hesitated to steal the show as soon as could. Including for the Queen of England!

« I was five or six. We drove to "La puce Lumineuse" my parents’ lighting shop. (...). It was still dark. My father parked the car then lifted up the shop’s big metal shutter. (...) My mother and I stayed at the door. She put her hands on my shoulders and bent down to my ear to murmur: « Look my Sacha, open your eyes wide. » Suddenly dozens of lights of all sorts lit up. I blinked my eyes. In one move, my father had switched on the electricity of a large part of the shop. I was blinded by the light. But I went in. Behind me, the dark, the city, "Les Puces" which were starting to come alive, didn’t exist anymore. (...) My eyes were fixed on the thousands of lights dazzling me. My mother’s hands were still on my shoulders: « It’s magical, don’t you think Sachinka? »

From the Noise Makers to Chicago

Dionne & Sacha, friends in life as well as on stage. Here at the Olympia theater in 1966. (Copyright Jean-Claude SAUER / PARIS MATCH)

Lights / stage... Stage / lights.... The stage... This would finally be the love of his life. In fact, since the Noise Makers of the to the musical Chicago (in 2001) where he successfully took the leading role, principal, passing through the jazz club, the stage, Sacha never left it. He never forgot either that it was facing a stage that he discovered his first real musical emotions: 1948, at the instigation of Ray Ventura and Bruno Coquatrix, he discovered the jazz of Dizzy Gillespie at the Alhambra. What an effect! Forever engraved in a dark corner of his memory: on that day, Sacha understood that it is only on stage where such thrills are born. That it’s there that an artist receives his recognition or not, his credibility, his honour. Ten years later, in December 1958, it was on stage, in Algiers, in the heat of the moment, « Scoubidou » (and success at the same time) were born.

Sacha strung together an impressive series at Olympia

From then on, everything went very fast for Sacha, and the years went by playing in jazz clubs served the star that he had instantly become. Artistically and scenically inspired by the class of certain members such as Dean Martin of the famous ‘Rat Pack’, Sasha would never depart from his legendary elegance, an incredible sense of the replica that ‘scored a bull’s-eye’ and of this humour, which no matter where he was, would always make the difference. In France, as well as the jazzy smoky Saint Germain, it was the Coquatrix music hall which would be the departure point for virtually everything. Right from the start of his career, at each beginning of term, Sacha would line up an imposing series at Olympia. His own style of « warm up » ...

From Maurice Chevalier to the Queen of England

In London, his second home, he was often on stage at the Talk Of The Town or the London Palladium. Sometimes, as in 1968 or in 1971, at the special request of the Queen of England who especially appreciated the voice and smile of the singing Frenchman. Quincy Jones, Tony Bennet, Dionne Warwick, Antonio Carlos Jobim, Baden Powel, without forgetting the Collégiens, Al Jarreau, Tina Turner, and also Johnny, Brassens, Salvador, Bardot, Adamo... All had a time, on stage, encountered Sacha’s microphone.
Even « Ma Pomme » Maurice Chevalier himself, didn’t make a mistake when he recognised in Sacha, a sort of spiritual son who he would have liked to see playing his own role in a Hollywood film of his life. The subject came up, Sacha would have adored doing it and then....

All that counted was the blank face of the audience and the musicians behind me. 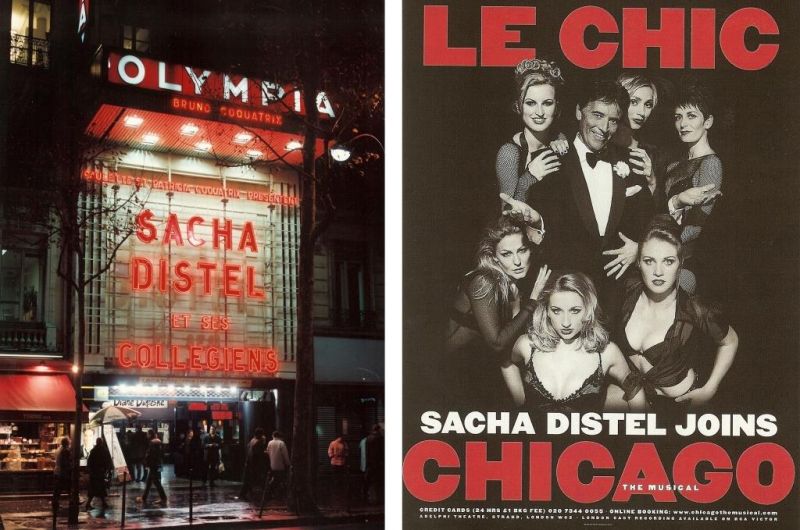 « How many times have I seen the curtain go up and the projectors light up in front of me? One day I tried to count. The total must be between five and six thousand. Impossible to be precise. It’s not important, all that counted was the blank face of the audience, the musicians that I sense ready, behind me, a few metres away, the attack of the orchestra, the first song which flows like a dream then my legs in cotton wool, the brutal awareness of where I am, of you who are in front of me and who I can only distinguish a few faces.
Applause. A wink at my orchestra leader and off we go again. (...) I’m singing for each one of you in spite of not being able to see you.»